What the $%^# is The Roman Protocol, actually?

"Are you just going to tell us to drink more water?"

Here at NOTM, we get questions about what The Roman Protocol actually is, a lot.

So this weeks blog post is dedicating to pulling the curtains open on what The Roman Protocol (TRP) is and what kind of transformations our wrestler's go through.

We're also going to go technical on ya and show you exactly what we do to make sure the athletes who go through out program are successful for their current season, and every single season moving forward; for the rest of their wrestling careers.

Results matter, right?  All the cool program features and support in the world doesn't matter if you don't get the results you want.

So here's exactly what The Roman Protocol gets wrestler's in terms of improving their performance and making weight. 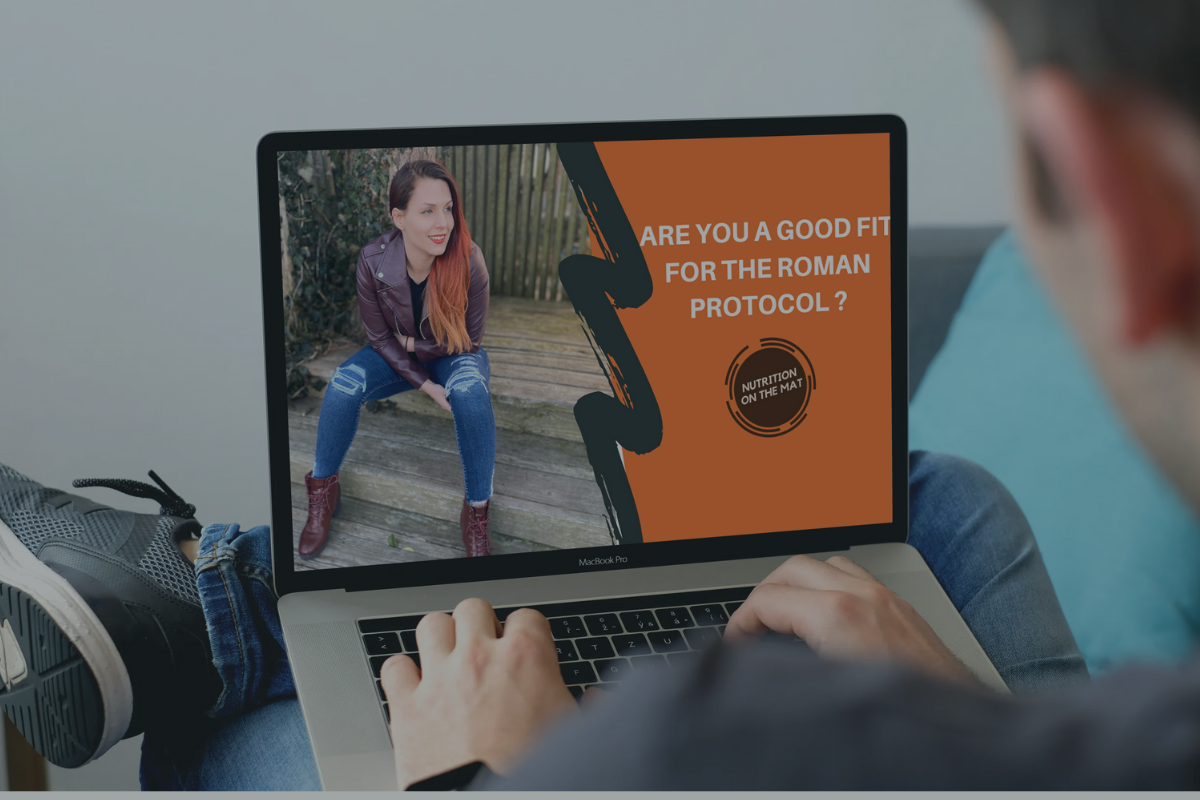 TRP is a strategic system designs with two things in minds in terms of improving a wrestler's athletic abilities:

The first being having our wrestler's maximize their strength, performance, and aggressiveness on the mat during every single phase of training.

By showing wrestler's how to use the performance nutrition blueprint.

The performance nutrition blueprint is an exact system designed to show wrestlers how to create and implement a wrestling performance plan successfully during every phase of training, year round.

This means the program shows wrestlers...

Fueling in the off-season:

How to strategically increase muscle mass, strength, and endurance in order to have a performance edge once the season kicks in.

In other words, a strategic plan for how to hit your ideal weight class (whether that involves weight loss OR weight gain); and how to do it without losing your strength in the process.

How to fuel on a daily basis to keep energy and focus up in order to maximize performance gains during practice.

How to fuel for every single match; including duals, tournaments, or consecutive day meets.

How to fuel for pre- and post-workout or competition to avoid gassing out, and instead having 100% energy on the mat during every single period of every match.

How to create your own performance nutrition plans based on your wrestler's OWN food preferences within the program.

Disclaimer: We don't mean how to eat two whole pizzas the night before a weigh-in and still make weight.  We're not THAT good (yet).

How to still be successful while eating out or hanging out with friends.. without being hangry, moody, or irritable the entire season.

How to fuel to maximize energy for every single training, practice or match; including duals, tournaments, consecutive, and alternate day weigh-ins.

The performance nutrition blueprint shows wrestlers everything they need to know about dramatically improving their strength, energy levels, and performance on and off the mat regardless of their weight or body composition goals.

Click Here for the Free Training on The Roman Protocol

...And how to do it without starving, sweating, spitting, hours of cardio, or other aggressive cutting techniques.

Dramatic improvements to performance mean nothing without a surefire way to make weigh-ins, right?

Because things like starving, dehydrating, sauna suits, spitting in bottles, salt baths, and hours of cardio for days on end have horrible effects on a wrestlers strength and energy levels throughout the season.

Not only that, the more a wrestler uses old school cutting techniques, the more their body begins to "fight back" by holding onto as much water weight as possible in an effort to maintain homeostasis.

1. We train the body to make weight WITHOUT starving or dehydrating

Remember when I talked about how old school cutting makes the body hold onto water weight a second ago?

The reason this happens is because of a hormone called Antidiuretic Hormone-- or ADH for short.  The more wrestler's dehydrate, sweat, and starve; the more the body pumps out this hormone in an effort to hold onto as much water as possible.

Our bodies are incredibly smart-- sadly they don't know wrestler's are trying to get rid of water weight on purpose.

All the body knows when this happens is that in order to perform critical functions like regulating organs, keeping the body energized, and maintaining homeostasis are negatively impacted when the body is dehydrated.

So, it fights back.

Often times wrestlers will have little trouble making weigh-ins in the beginning of the season but find that every time they do old school cutting, they can lose less and less weight.

ADH is the key behind this.

What TRP does differently is this:  Instead of forcing the body to upregulate ADH to hold onto as much water as possible, we flip that switch in the opposite direction to open the floodgates instead 24 hours before a wrestler has to make weight.

By consuming a low residue diet and strategically superhydrating based on a wrestler's individual needs (their height, weight, age, weight class, training regimen, sweat rate, etc.) and drinking the right type of fluids at the right times...

We can trick the body into dropping a massive amount of water weight in an extremely short amount of time.  Roughly 5 to 10 lbs worth in 24 hours.

At this point I bet you're thinking: That's great, but isn't that still dehydrating a wrestler?

The second reason TRP is different, and massively successful compared to outdated cutting techniques isn't just the ability to drop boatloads of water weight in only a day vs the 5-7 days it takes the average wrestler to make weight using old school cutting.

It's also in the type of water weight we train the body to lose.

Outdated cutting techniques rely on the body losing a type of water called extracellular water weight.  This is the water found outside the cells of the body that are responsible for all of those important bodily functions we mentioned previously.  Addition to just being generally bad from a health standpoint, losing extracellular water weight causes those nasty signs and symptoms of dehydration, including fatigue, brain fog, lack of strength, and poor concentration on the mat.

Able to drink boat loads of water up until 24 hours before a weigh-in? Check

No loss of energy, strength, or performance on the mat? Check

The Roman Protocol gives wrestlers all the benefits of having a strategic way to make weigh-ins without any of the negative side effects that come from typical cutting.

So now that we know the kind of results wrestlers get with this program, let's get into how.

Click Here for the Free Training on The Roman Protocol

How Wrestler's Are Set for Success

The way the program is delivered consists of three main parts.

The first part of the program includes a training portal that every single wrestler who joins TRP has access to.  This portal walks wrestlers through every single thing they need to know in order to successfully implement both the performance nutrition blueprint and weigh-in process of The Roman Protocol.

Each module in the portal has training videos, tools, and very specific tasks designed to show wrestler's exactly what they need to do to be successful during every single part of the program.

Even better, everything is extremely simple when going through the program.  There's no math involved, no complicated calculations or head scratching-- promise.

The (second) best part: Each wrestler gets lifetime access to this portal once they enroll in the program.  We're constantly making updates for how to make our program better and more efficient.

On top of that, your wrestler will be able to using this system every single season if they need a refresher, are competing at a different weight class, or just want to review their plans.

A training portal is great-- but tools mean nothing without someone to show you how to use them.

In addition to the trainings, Jackie hosts several Q&A calls every week where each wrestler can hop on to get any type of support needed to be successful using TRP.

There are no limits.

Have a basic question about the program?

Just need to brainstorm for an upcoming match or tournament?

Anything wrestlers need to successfully implement TRP will be handled on those calls to make sure that every single program client gets individualized support in order to guarantee that they hit their goals.

The third part of TRP involves our community.  Program clients get access to our private group that has direct access to both Jackie and every other wrestler, parent, and coach currently going through the program.

The community is a place to ask questions, get feedback, or just brainstorm-- and get very quick support directly from Jackie.

It's essentially another safety net that program clients have access to, in order to get questions answered.

The Success Rate of The Roman Protocol

The Roman Protocol has a 100% success rate for athletes and families who go through the program.

On average, learning and implement TRP program takes roughly 45 minutes per week. Any wrestler who has actively gone through the program has been successful in dramatically improving their strength, energy, and performance while being able to drop 5 to 10lbs in 24 hours for weigh-ins.

The only caveat is this: The Roman Protocol isn't magic.  There's no big red button or wand to wave where people who enroll get instant results.

Our 100% success rate is successful only to wrestler's who take the 45 minutes a week to learn and implement the program.

How do we make sure we only take wrestlers who will complete the program?

Every person who applies to The Roman Protocol fills out a survey and books a call directly with Jackie where we chat to make sure the program will be a good fit and that it will get the results each family and wrestler are looking for.

This way, we can guarantee the wrestlers we work with will hit their performance and weigh-in goals.

While TRP isn't magic, it is a world-class program designed to show wrestlers how to dramatically improve their energy, strength, and performance on the mat.  All while making weigh-ins, even if they have 5 or 10 pounds to lose.

The structure of the program shows wrestlers how to learn this entire process themselves so they can be successful for every season of their wrestling career-- regardless of if they have to bump up, down, or anything in between.

All while providing individualized support to make sure every athlete and family who goes through the program is successful and reaches their goals.

If your wrestler is ready to dramatically improve their performance while making weigh-ins an after thought, we're currently accepting a limited number of athletes into TRP at this time.

[Click here] or use the button below to apply for the program and schedule a 1:1 call with Jackie to see if your wrestler would be a good fit.

P.S. Were there any questions about The Roman Protocol not covered in this blog or video?  I'd love to hear from you!  Comment below and let me know what you're itching to find out.